It was a lazy Saturday afternoon and I was fiddling with my PowerShotS2IS again. I had spent the last two months taking photos with this camera without as much as looking at the manual that came with it. My policy has always been to shoot first ask questions later. But then again there were way too many options on the menu that didn’t make any sense and the camera wasn’t doing everything I was asking it to do. Stoopid camera. I am ashamed to admit that I surrendered and decided to read the manual.
But first I needed a subject. There he was glowing like a superstar and I made him an offer he could not refuse. I offered a personalized photo shoot for no charge and he accepted … for the most part because he was a fish.
His name is Mr. Wiggles and he is a spectacular ruby red beta fish. This wasn’t the first time Mr. Wiggles was modeling. Yes, I had made an offer he could not refuse one other time. To describe our first photo shoot in one word ... miserable failure. Okay that’s two words but who is counting? He was grumpy, I refused to read the manual and as a result we ended up with a red blob floating in a bowl. But that’s ancient history.
We began with cautious optimism. I was eagerly poring through the literature while Mr. Wiggles decided to do whatever it is that he does in the fish bowl. I was soon trigger-happy shooting red blurs in water. Wiggles understandably did not share my enthusiasm. But then it happened, the light bounced pristinely over Mr. Wiggles and he swirled in the water like an agile acrobat and I captured it in all its glory. Ladies and gentlemen, I am proud to present my nimble finned debutant, Mr. Wiggles. 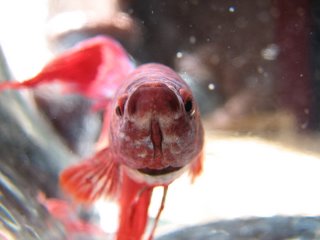 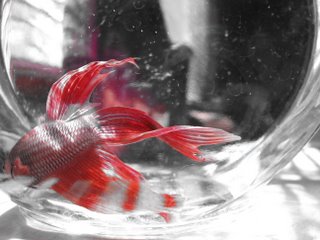 Can't get enough of Mr. Wiggles? More photos at http://www.flickr.com/photos/crystalblur/
at Saturday, March 18, 2006

Shaken but not stirred

I had the misfortune of watching a part of Larry King live on CNN where King was interviewing Donald Trump.
I quote the following from the show:
KING: What's Trump vodka?
TRUMP: Well that's a drink that -- and by the way, the profits from that go to various studies on alcoholism and everything else.
(What? You must be shitting me! The interview continues in all seriousness).
TRUMP: But we launched a vodka called Trump vodka, and we're considering it -- and I think it will be the finest vodka anywhere in the world.
A shot of irony straight up.
at Saturday, March 11, 2006